Fantastic photos that will ins.. 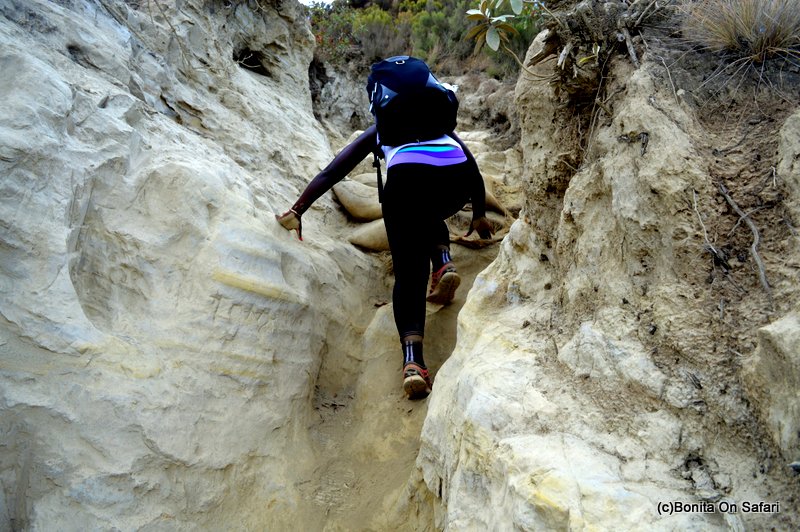 Domestic tourism in Kenya has been on the rise in the past five years. As an ardent local traveler,affordable domestic tour packages provided by local tour operators are the best things to happen in these wanderlust corridors.

Day tours or one to two nights out of town have gained popularity amongst Kenyans because of their affordability and the fact that they are mainly held over the weekend hence no interference with normal work week schedule.

Last Sunday, Xtrym Adventures  one of the leading organizers of adventures, safari and hikes in Kenya hooked us up with yet another group that was going to Mt.Longonot.

The cost of hiking the mountain, park entry fees, half a litre of water and transport to and fro Nairobi was all valued at Ksh.2,199 (Approx USD 22)

Mt. Longonot is about 60Km from Nairobi,Kenya. It located inside Mt.Longonot National Park. A trip from Nairobi will be slightly less than an hour to the gate of the park. The scenery as you descend Maai-Mahiu road is breathtaking. This is where you get to see the floor of the Great Rift Valley and even appreciate the mighty Mt.Longonot as is rises majestically to a thick cloud above. 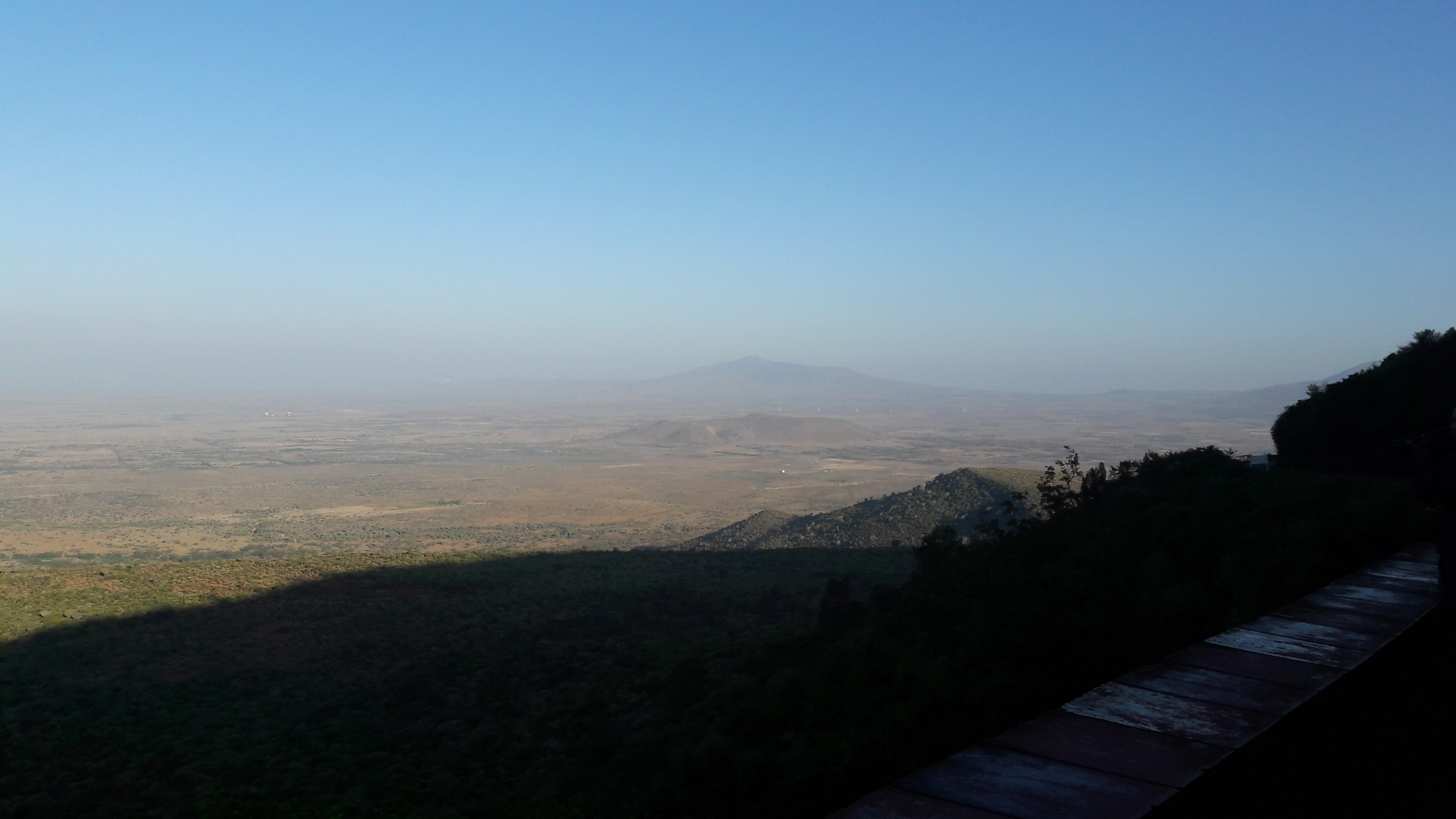 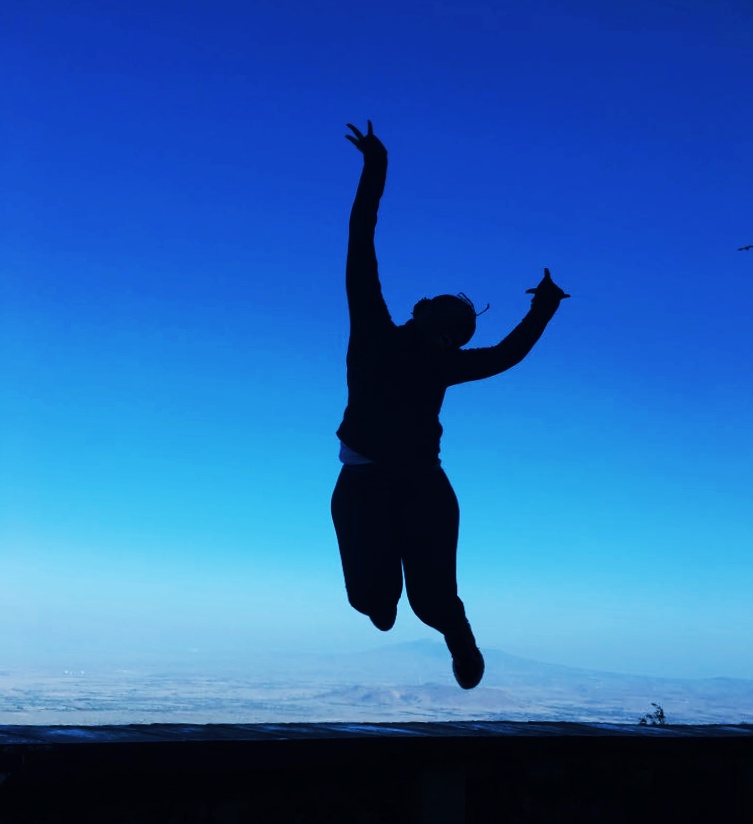 Once we approached the park’s gate, the mountain looked like kid’s play.Easy stuff. Our guide mentioned we will be back to the gate after approximately six hours. Honestly we did not understand why… I mean seriously this hillock shouldn’t be a hard nut to crack.

Time is an important factor to consider when you are planning this hike. The earlier you begin the hike the better.Because then, the sun won’t be so hot. I guess the toughest task would be hiking with a heavy bag in scorching sun.

When we got to the gate, we stretched (vital to avoid muscle pull), paid at the gate then proceeded. 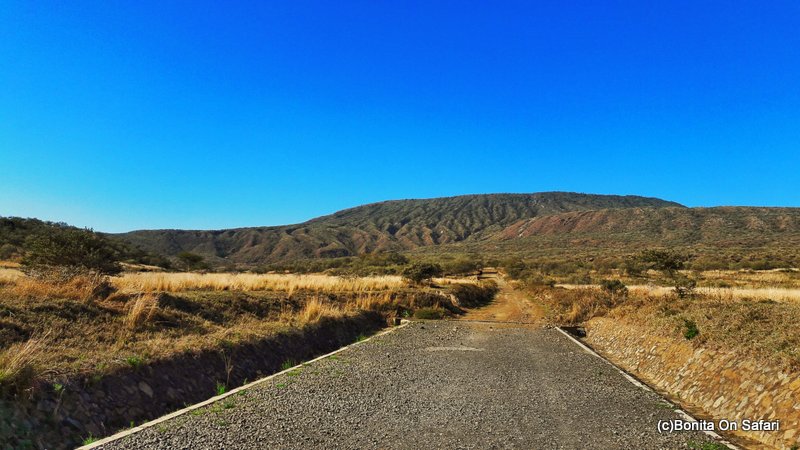 Mt.Longonot as seen from the gate.

There is a stretch that leads to the foot of the mountain. Zebras and Impalas can easy be spotted grazing.I did not see any monkeys though…I assumed they were still asleep.lol.

The initial stages of the ascend were effortless. But the events to unfold later made me want to take back my words. The trail slowly but surely became steeper and thinner and the peeping sun finally come out strong. The terrain was dusty but we soldiered on. I asked how long before  we got to the peak and everyone burst out laughing. I needed no answer clearly. We were no where near the peak. 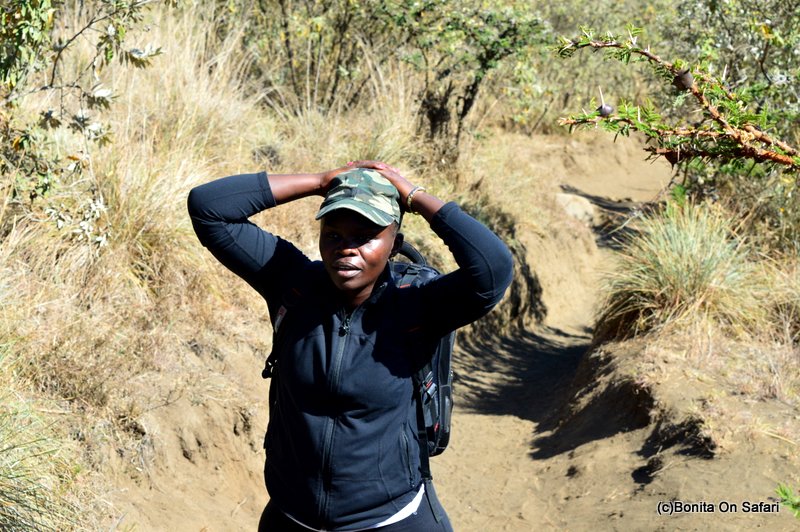 Well, I guess sometimes you only need someone to laugh at you to ignite the fire inside.

The steeper the terrain ,the tougher I became. I had to prove a point you know…(Wrong mentality…but it was fun…) 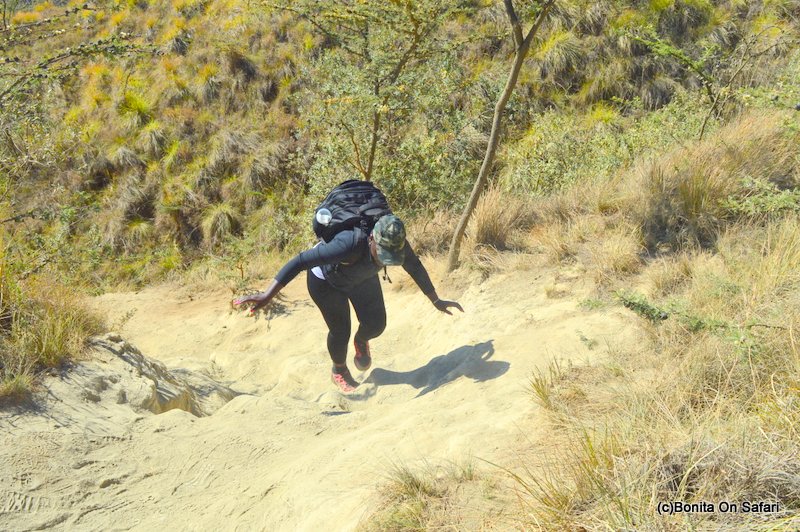 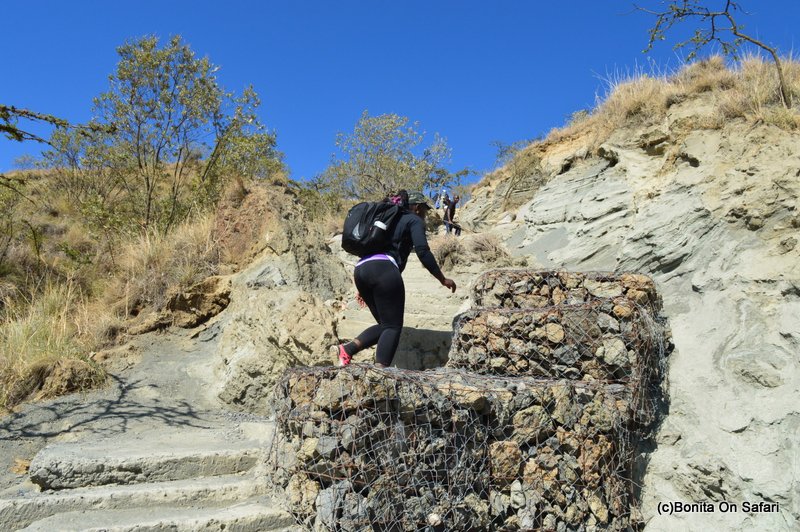 Eva, my pal, did exceptionally well too. It was hard to imagine we were sweepers at some point. 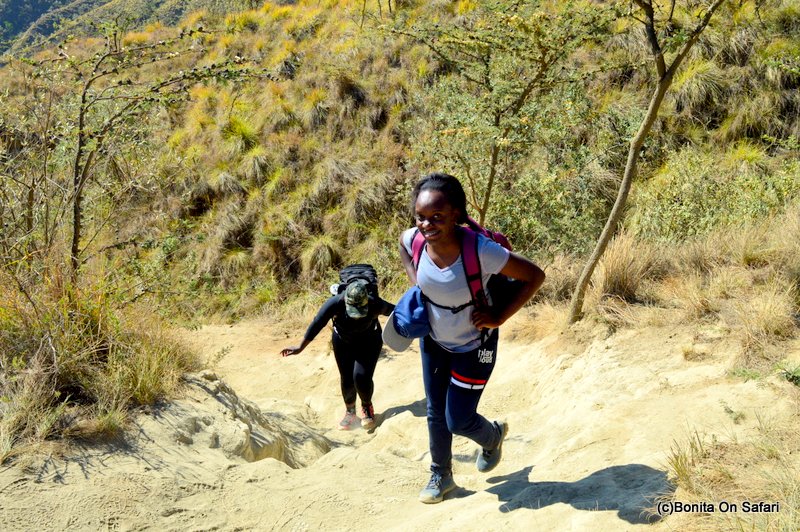 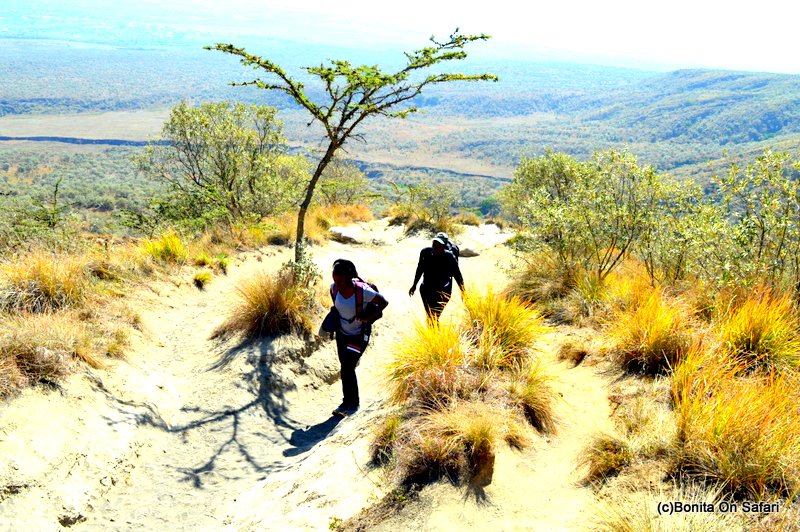 Truth be told,hiking is not for the faint hearted and has nothing to do with physical strength. It all about attitude and mental strength. It is also not about competing with the rest, but just finding your own way to get to the top. Sometimes you lead, other times you are led. 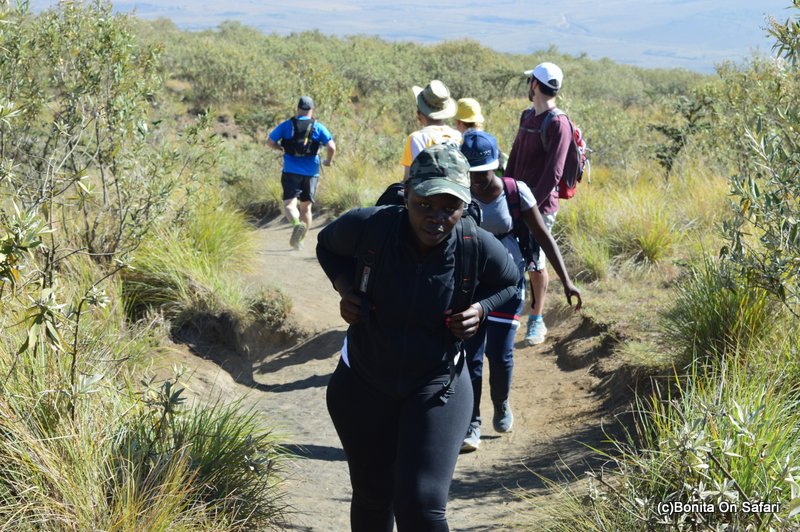 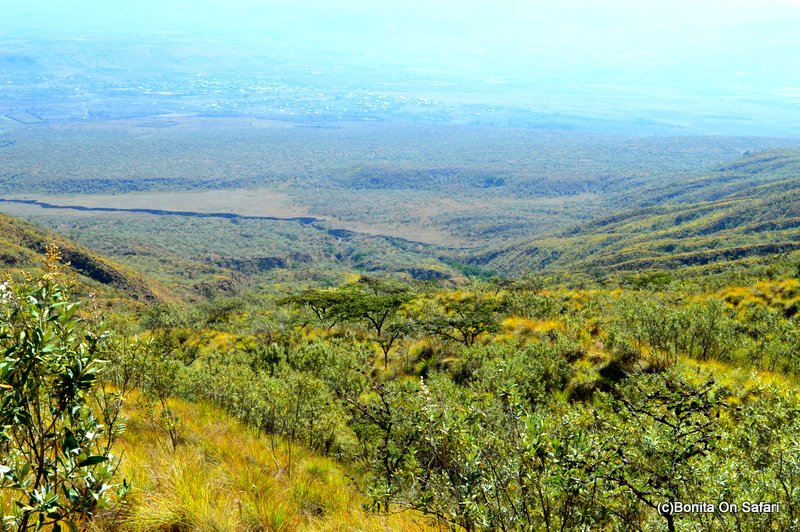 After about an hour or so, we were told that the peak was a few meters away. That statement gave us a little more energy to soldier on. There was apparently a small hut at the top of the hill. Once you begin to see it, then be sure you are almost there. The hut is the first place you can sit and replenish.

A few minutes later, not only did we get to the hut, but also to the first peak! 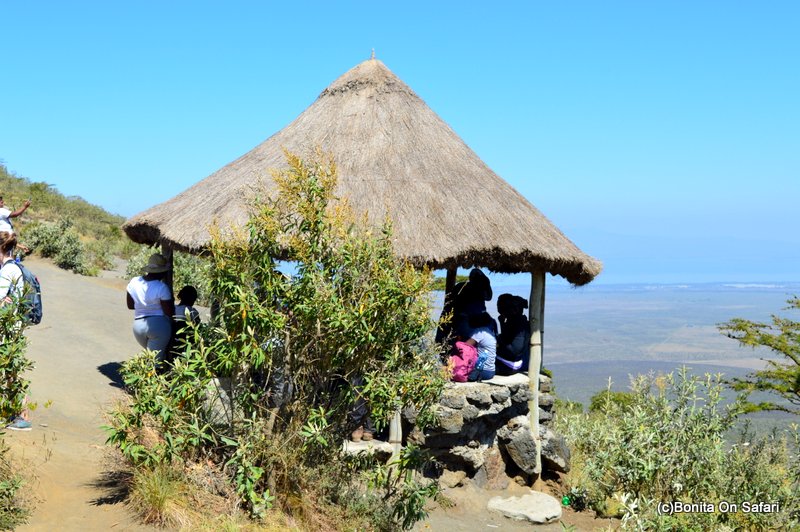 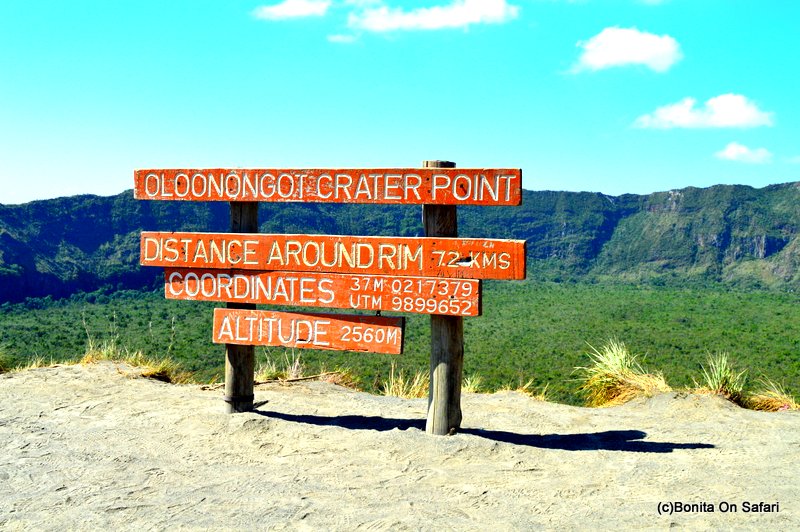 We were allowed a ten minute break to breath and grab something. Be advised to carry some lucozade, a banana, apples or grapes. You will thank me later. 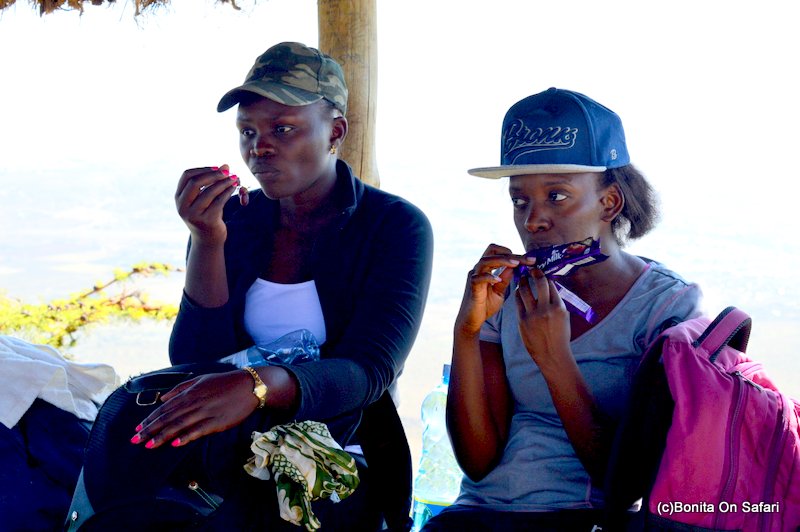 The next phase was a trek around the rim of crater. The view was encouraging. This was the point where Naivasha,Lake Naivasha and its environs could be seen in perspective. The Rim of the crater is said to be 7.2km. However it felt like 14.4km ?. 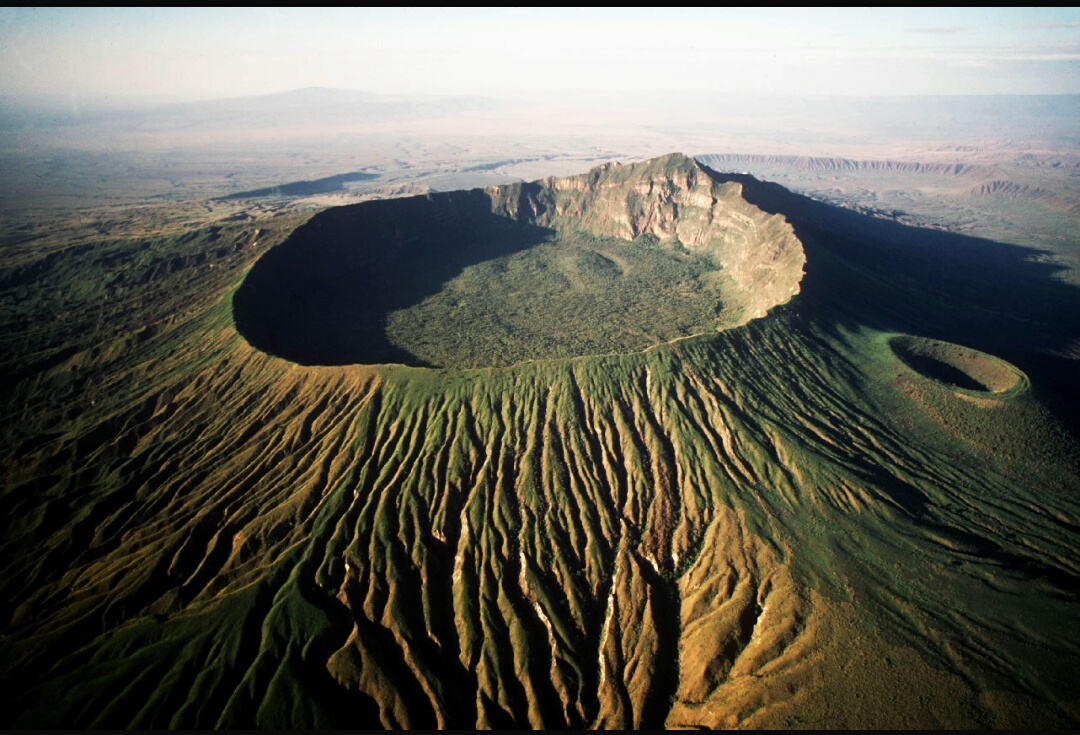 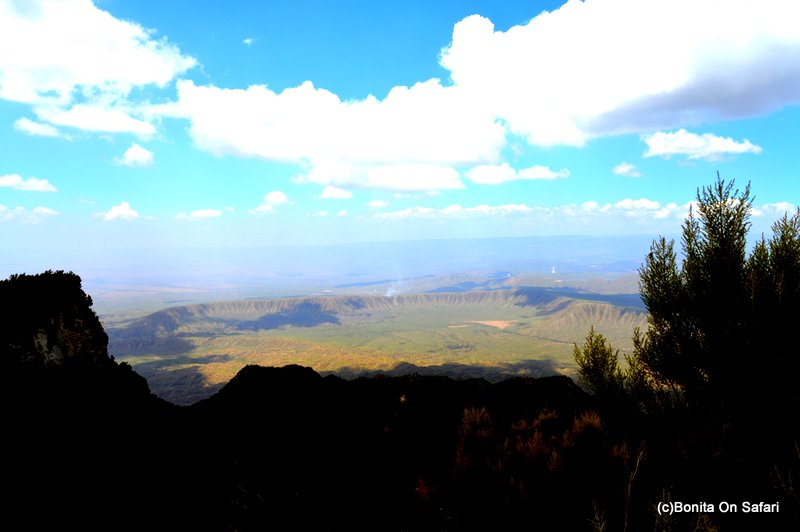 Phase two started out well. We were energized and excited to go round the rim. The excitement was soon to come to an end when I was told there is yet the highest peak of the mountain that we were to cover. This only meant, twice the initial effort and thrice the attitude.

The slopes were steeper here, the loose volcanic gravel beneath the feet proved difficult to just walk. Then there was a thick layer of dust. In my opinion, that was the toughest part. 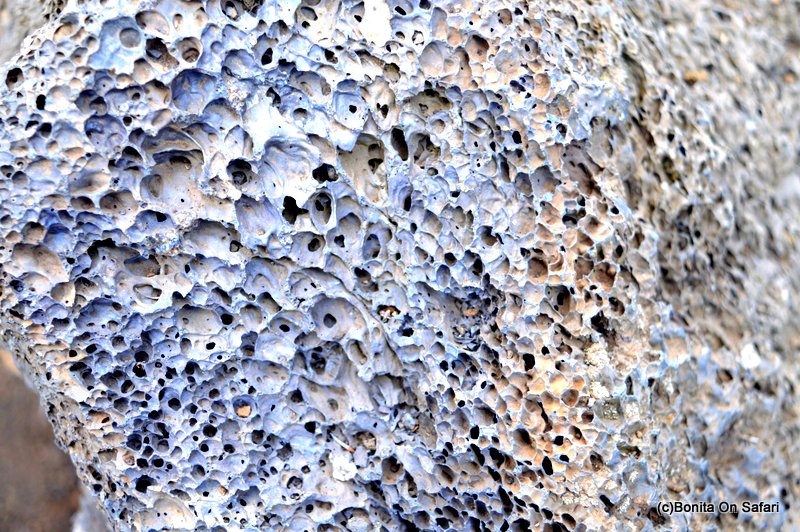 Type of rock and sand in the trail. 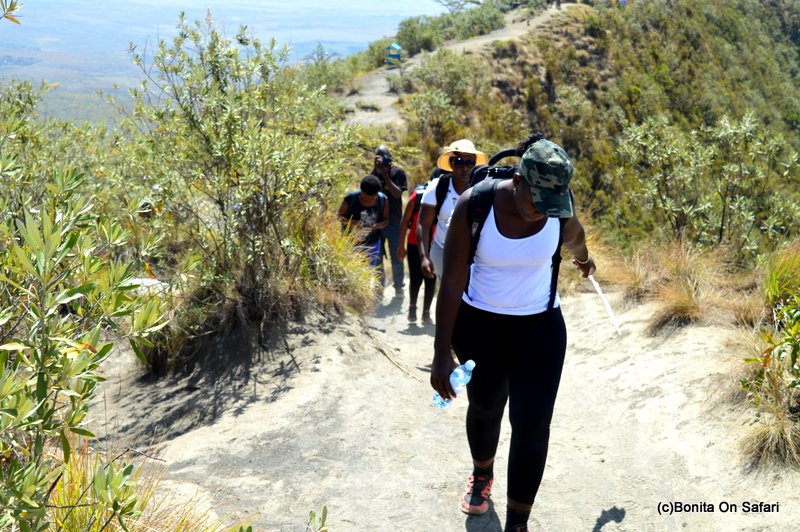 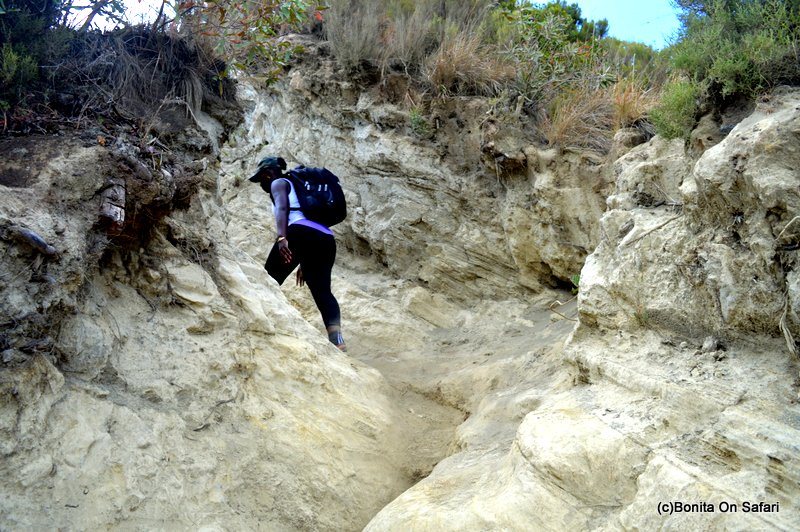 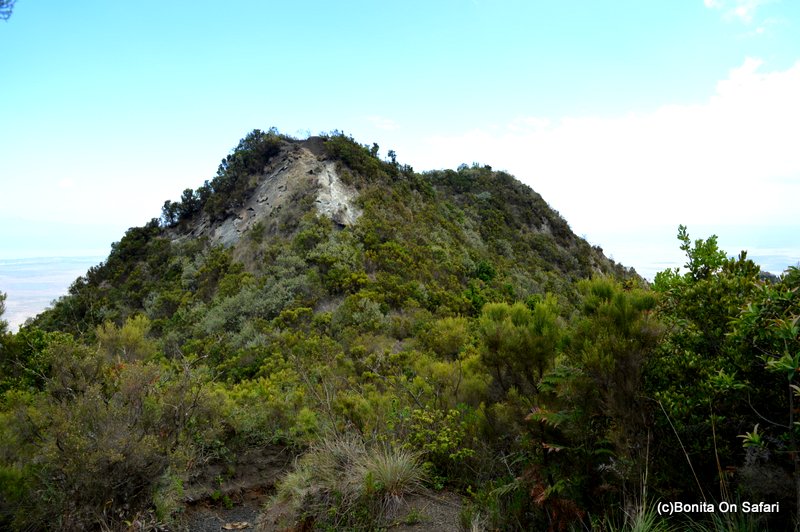 In about one and a half hours we reached the second peak. Well the highest. It is called Kilele Ngamia. It was completely worth the effort. The view was so refreshing that any pain and struggle experienced earlier is quickly forgotten. 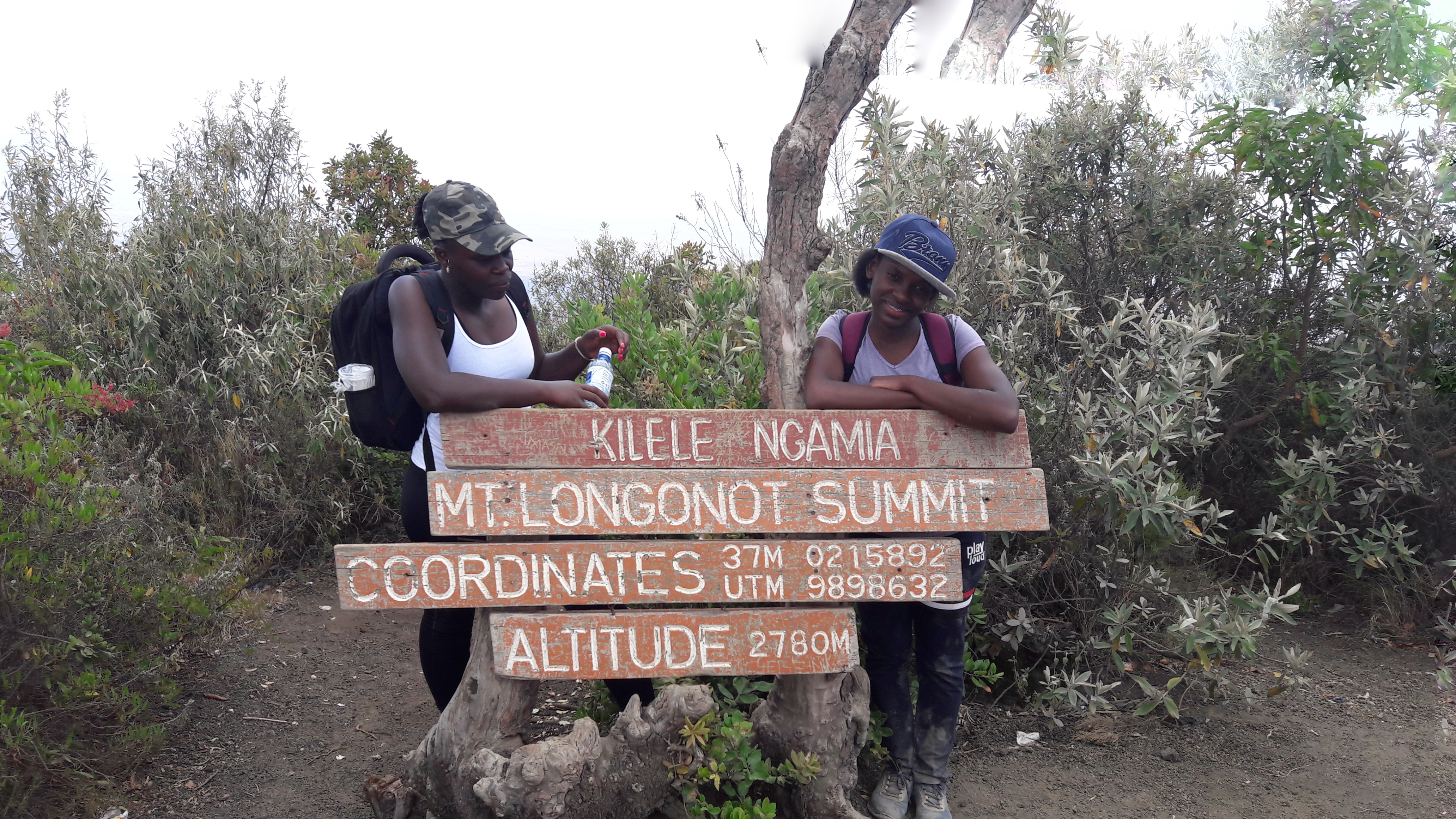 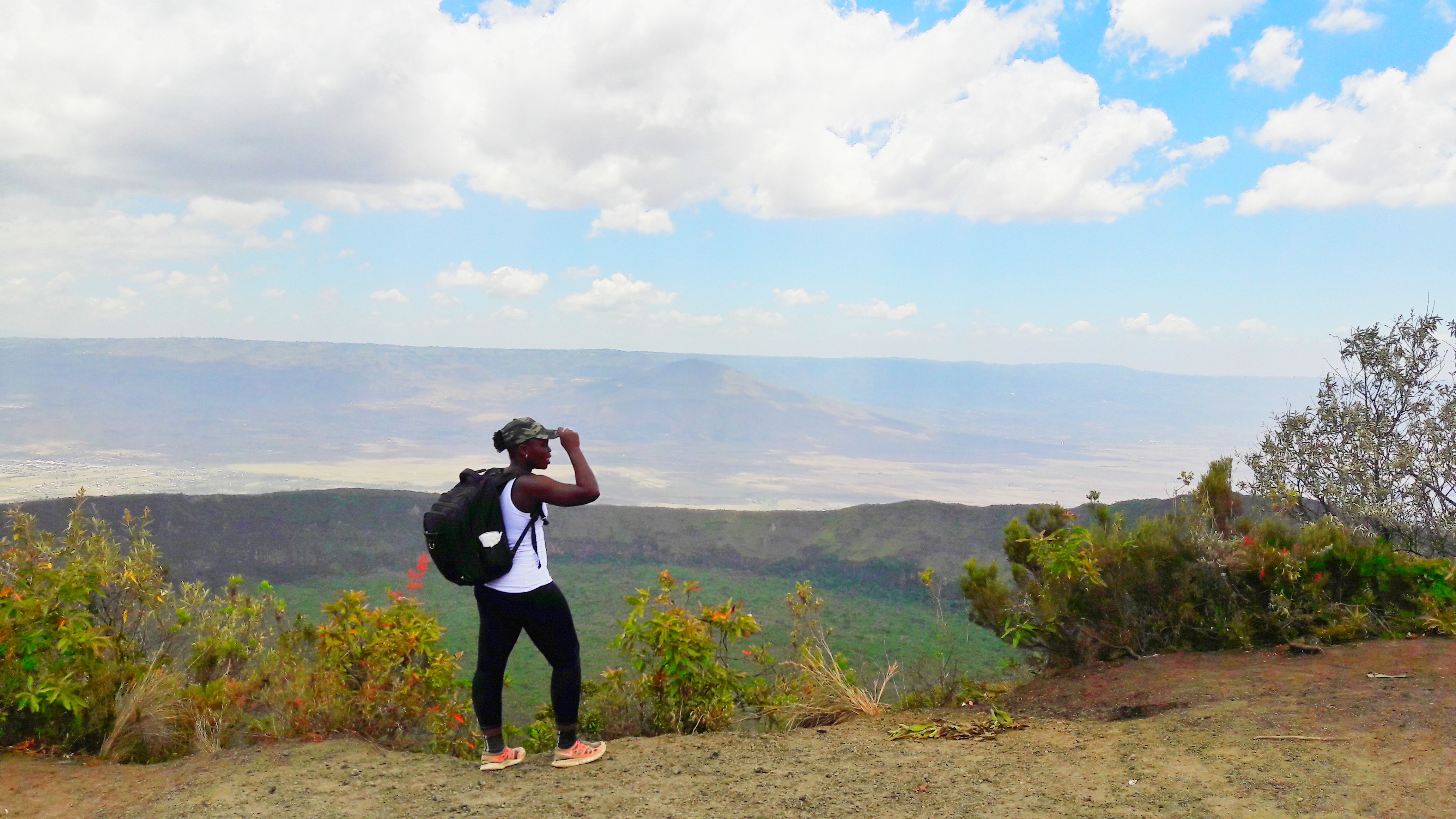 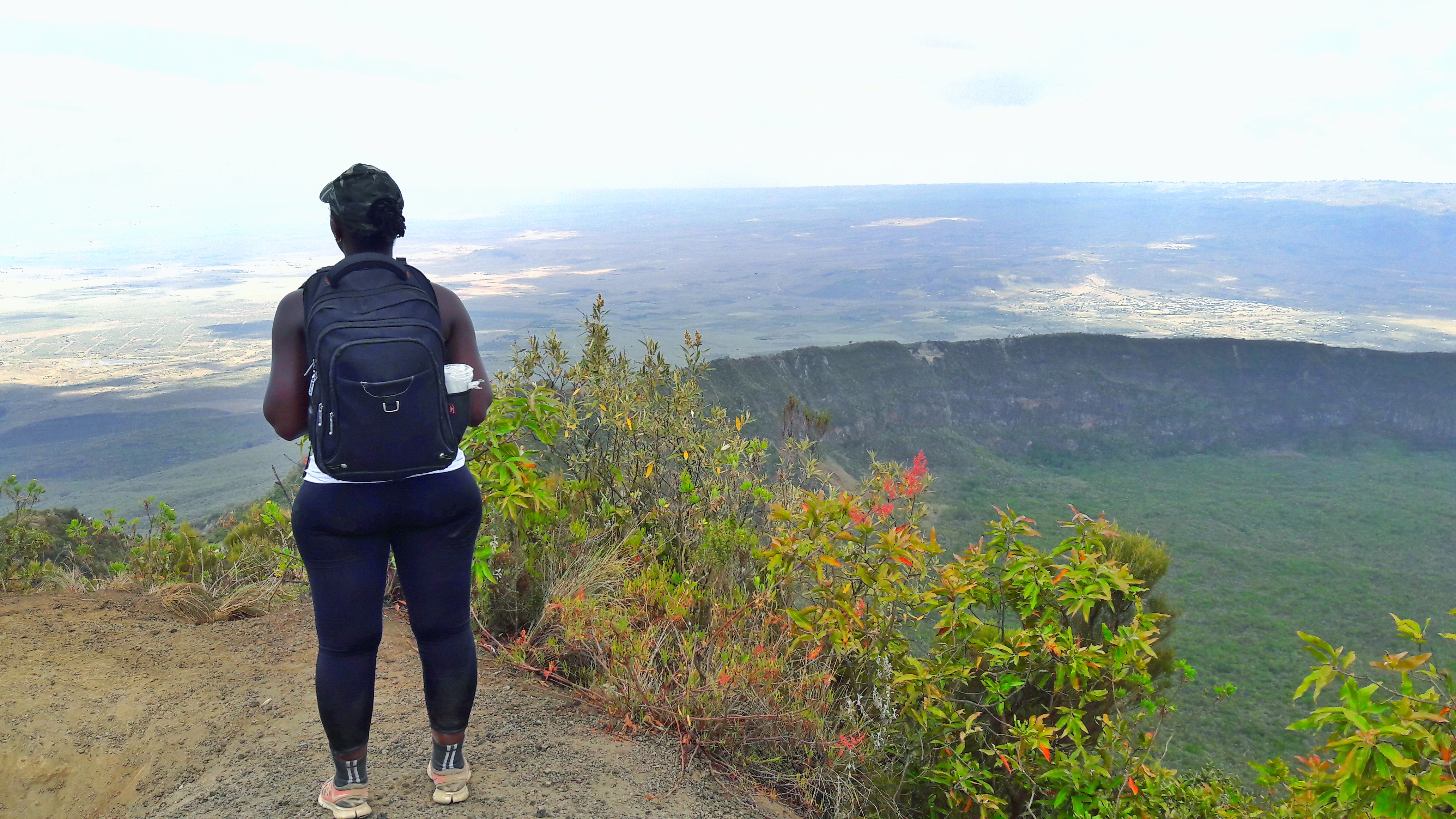 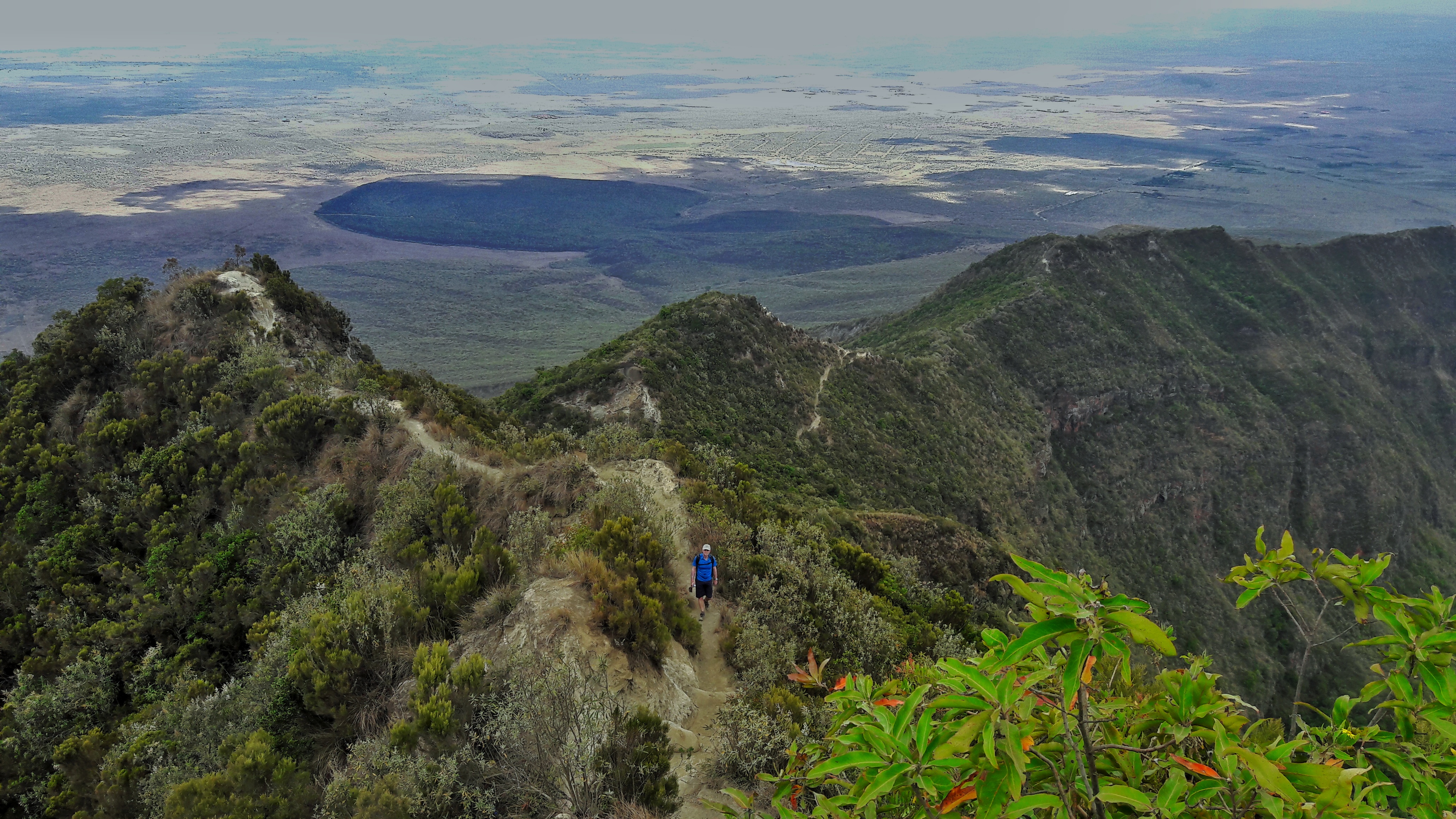 Nothing happens here apart from photos. From Kilele Ngamia, the rest of the hike was easy. It was mainly descending.

In about an hour, we were back to the little hut. Which has notoriously been named the ‘watering hole.’

Nothing feels as good as ascending and going round the rim! 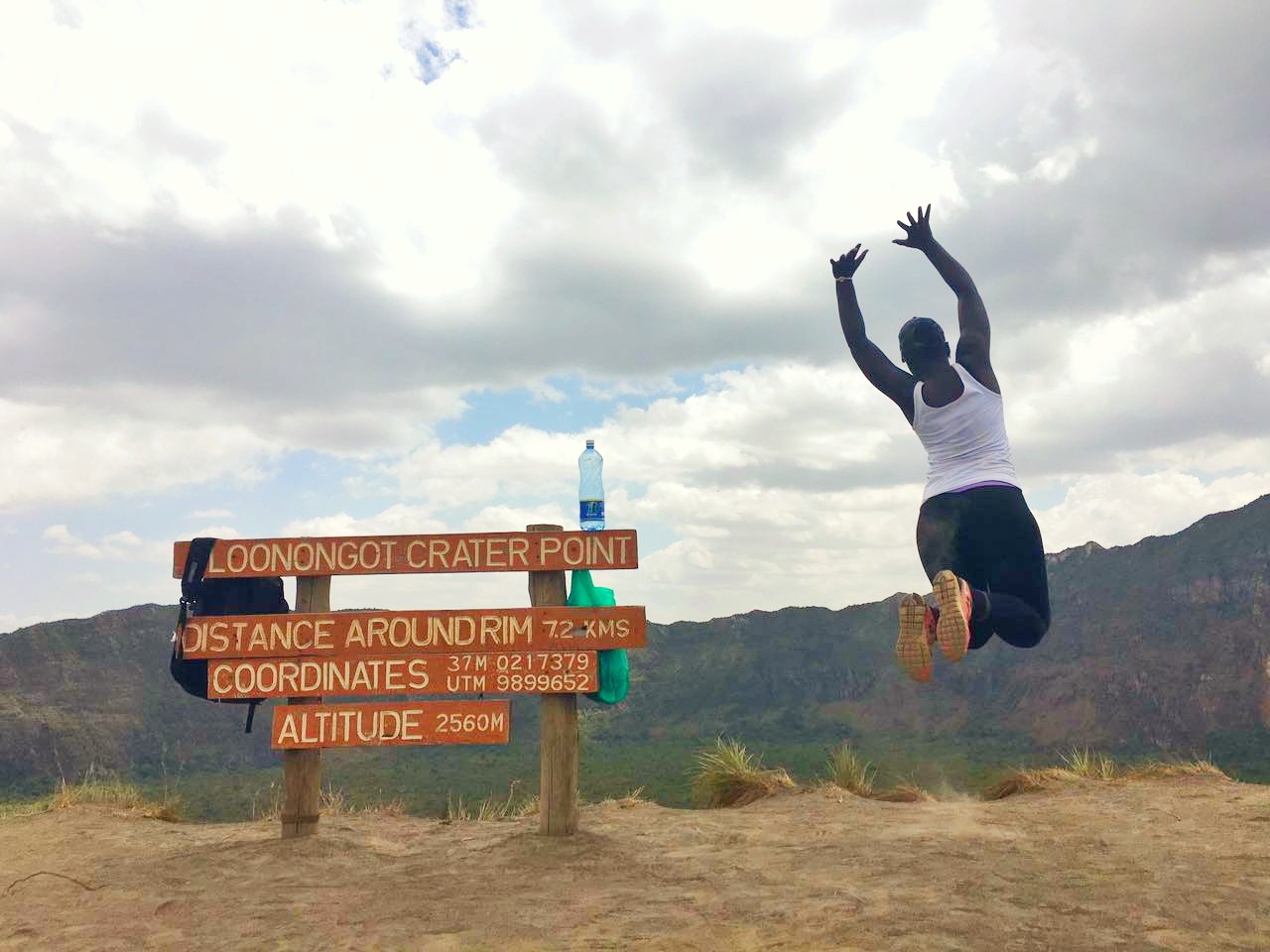 Going down using the same route was at that point easier… Did I mention were were leading the pack that whole time?

Before long we were back to where we started.

All beat and tired and about 5 hours later.

What more would you like to know about this hike?

Hope to see you hiking soon!

You can also check out Africa Outdoor Safaris for more details. 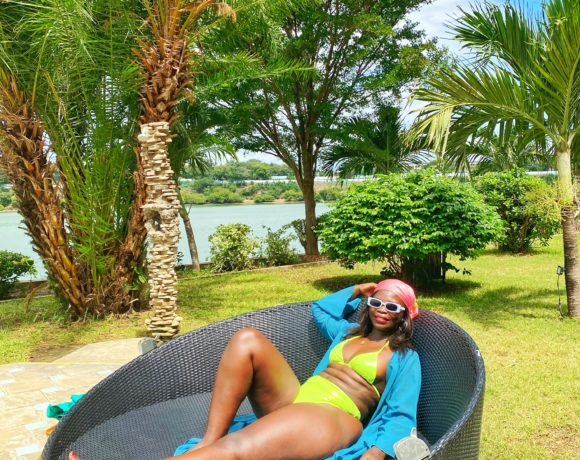 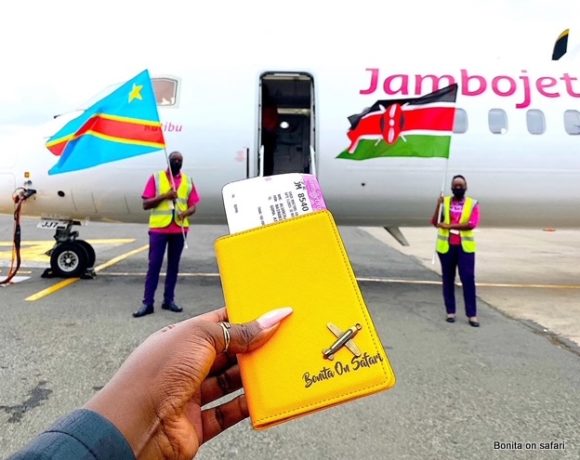 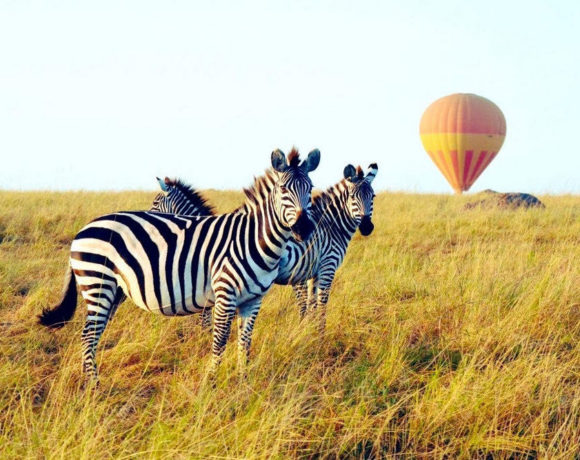