Top reasons why you should visit Marsabit County w...

Top reasons why you should visit Marsabit County with Kilian Tours 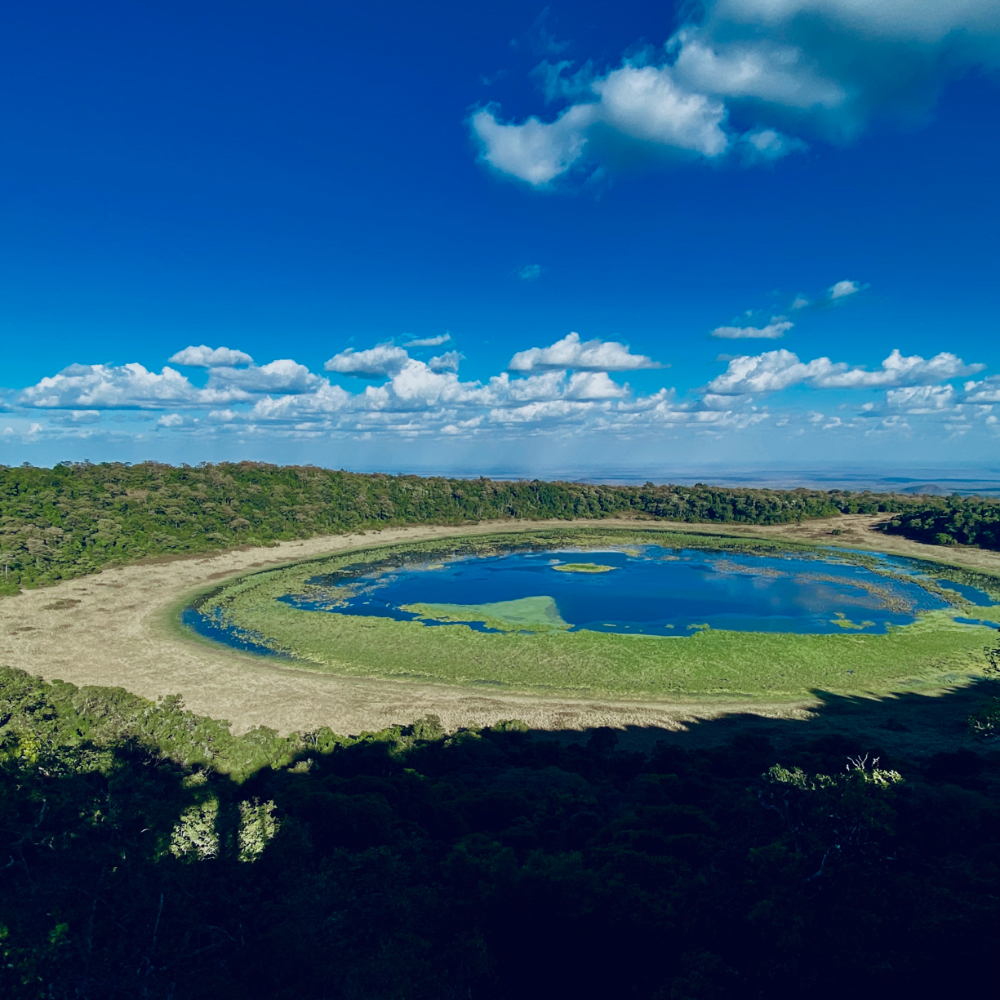 Marsabit County is a gem. The first time I toured Marsabit county I was pleasantly surprised. What I did not know was that there was so much beauty hidden behind the insecurity and negative media coverage that was usually caused by a long-standing rivalry between the Gabra and the Borana communities of Marsabit. In addition to the two ethnic groups, others include Rendille, Rajuni, Gendile, Burji, and other minor communities. It is so easy to think that this county has very little to offer in terms of travel and tourism but that is not the case. I still feel Marsabit needs to be talked about more often and a bit louder because some stories are best seen than heard!

There are many reasons to visit Marsabit; the largest county in Kenya that internationally borders Ethiopia to the North, and locally borders Samburu, Turkana, Wajir, and Isiolo counties. What I am sharing here is just the tip of the iceberg! The county is outstanding in ways more than one including its vastness, the diverse natural features, a sharp contrast in climate and terrain, the people, their culture, and everything in between.

In the recent past, I have enjoyed going on trips with Kilian Tours; a tour company based in Kenya and offers safari and travel services throughout East Africa. The last time I traveled with them, I totally enjoyed myself. They are customer-oriented, they keep time, and offer above-average tour guiding services. Not once did I have to worry about missing my activities or flights. Give them all your monies! Tell them Bonita speaks very highly of them.

Another opportunity to go on a trip with them was highly welcomed. Imagine a trip to Marsabit with my faves, the crew from Kilian including Kinush; one of Kilian’s best driver/tour guide, a five-day itinerary, and an indomitable spirit of adventure. I was ready.

I have to make it clear at this point that if luxury, fancy hotels, and lodges, cool weather, shopping malls, nightclubs, fast food joints with an urban vibe are your preferences, then this might not be the trip for you. So once you leave Marsabit town for North Horr through Loyiangalani to Ngurunit, it is technically a week hot sun and all the discomforts it comes with, bumpy terrain,dust and hundreds of kilometers in between because if you don’t leave one tourist attraction early enough, you might not make it on time to the next one and you risk sleeping in the middle of nowhere.

The start from Nairobi

The Northern Odyssey from Nairobi always starts off with a nice buffering experience of scenic sites such as an unobstructed view of Mount Kenya, which can easily be viewed at the equator in Nanyuki, or further at a place called Timau. I liked the Timau stop-over better because it is then that you can get a double dose of a nice view of Mt.Kenya with a lace frontal of the lovely rolling fields of canola with an expansive backdrop of the Timau conservancy.

The road from Nairobi to Marsabit is one of the best roads in this country. The 530km stretch doesn’t spot even a single pothole! If you miss the equator in Timau the other mandatory stop Mt.Ololokwe (or Ol Donyo Sabache as it is known by locals). It is located in Namunyak Conservancy in Samburu County and is very high in the list of hikes I intend to do this year (laughs in pandemic). It is approximately 340km from Nairobi. See, as you drive north from the Archer’s post an optical Illusion will have you think that the 2000m flat-topped mountain with steep sides touches the sky and sits right in the middle of the road.

The rest of the journey up north to Marsabit town is usually lush and green, hilly, and with nice turns and bends into Marsabit town. If you have never been to Marsabit town, it can be so difficult to reconcile the actual situation on the ground and the Marsabit that we see on media.

We slept at Saku guest house that is located in Marsabit town. The guest house has self-contained rooms, instant showers, and a restaurant. Basic and functional.

We were so in luck to have traveled at a time when the most awaited initiation ceremony of the Rendille young men was happening. The ceremony takes place only once every 14 years! Can you imagine?! As we were entering Marsabit the previous day, we were treated to a spectacle of good-looking colorfully dressed Rendille Warani who had been rehearsing for their big event that was to take place the next day.

Kinush with his excellent interpersonal skilled drove us to the village where the ceremony was going to take place and made all the necessary arrangements to have us document the event. We were warmly welcomed and the host even served us a popular dish called Nyirnyir; pulled and pounded meat dry-fried in goat fat.

One of the village elders took us through the expected laid-out plans that lead to the big day. Apparently, it starts three months earlier, where the families of the boys, in this case, 600 boys, leave their villages and converge at an identified place. The women construct the manyattas upon arrival as each family contributes some amount to buy water for them and the livestock that will be supplied during the entire stay. As they settle in, the process of initiation of the boys begins. Usually, the day of the ceremony when the boys leave the bush is always the last event. In the three months, the nomadic community would live as though that is their home until the end of the initiation season.

Each of the boys being circumcised would then have a goat slaughtered in their honor on that day. During that time they live in the bush away from the Manyattas, eat from there, and go about their businesses from there. Women are not allowed in that area. It is only after the ceremony that the boys now men will be allowed back home.

The outfit for the ceremony.

The ceremony is marked by celebrations, songs, dances, chants, and high jumps. The initiates would then don their best traditional Rendille shuka, beaded leather belts, stripped colorful socks, sandak sandals and tuck in swords and rungu under their belts. They then smear red ochre mixed with petroleum jelly on their heads. Others go a step further to add hair clips, feathers, and pins!

The women; mothers and sisters also join in the song and dance as the celebrate the transition of their boys.

You can not go to Marsabit and not go to Marsabit National Park. This park is famed for three craters namely Gof Bongole that is 2.5km wide, Gof Sokorte Guda whose crater floor is home to lake Paradise, and Gof Sokorte dika the smallest of three craters. Marsabit National Park also houses a thick pristine fogged forest, has a diverse butterfly, and budding birdlife, and is the last refuge of the huge-tusked bull elephants. Early morning game drives can be a bit tricky considering how cold and foggy it gets hence poor visibility.

There is usually a sudden change in terrain, weather, and vegetation as the 200km off-road long stretch of the rocky, dusty, and hot journey into the Chalbi desert from Marsabit town begins. It is advisable to use a safari landrover to get through. The desert sits East of Lake Turkana. Archaeologists say that the Chalbi Desert was prehistorically a lake. The nearest small center in Chalbi is North Horr town which has basic amenities including small hotels, a hospital, and places to sleep, etc. Please note that service is purely for basic survival, nothing fancy.

We were very intentional to get to the sand dune of the Chalbi desert at the golden hour. unfortunately that day we missed the sunset by a whisker.

Sunrise at the Desert

The next morning we made it right on time for the most florid sunrise that rendered me speechless at first before I could wrap my mind around the glorious ushering of another new day in the desert.

There is an oasis a few kilometers from North Horr center. It is a much-needed break in between the desert safari. The oasis has spring water, green grass, and lots of doum palm trees. It is a common sight to spot livestock and birds like guinea fowls quenching their thirst.

Loyiangalani at the shores of Lake Turkana

Another day, another long drive from Chalbi as we headed west to Loiyangalani that lies at the shores of Lake Turkana. Lake Turkana; the world’s largest permanent desert lake sits in both Turkana and Marsabit counties. The El-Molo community dominantly inhabits this side of Marsabit. The population is so sparse and the heat is unbearable. Most of the inhabitants who live in El-Molo bay are fishermen. Again, given the time and distance to cover the next destination to South Horr, we could not stay longer in Loiyangalani. However, I am told of a nice hotel in Loiyangalani called Palm Shade Hotel, that you should probably check out and spend some time to enjoy the allure of Lake Turkana.

Located at the border of Samburu and Marsabit, is this little valley surrounded by the dreamy Ndoto mountains which we were told make a chain of mountains called Matthew ranges. The sliding rock of Ngurunit are a popular stop for tourists and locals. The smoothened rocks that form part of the Ngurunit river bed, are used as waterslides.

If you choose to stay at Ngurunit you can stay at Golbo guest house. They have both manyattas and concrete round huts. The food is really nice and the hosts are so hands-on.

By the time we were done with Ngurunit, I doubt anyone had the energy to spend an extra day up North. The fatigue- silence was so loud all the way from Ngurunit to Merille; an emerging urban center along the Isiolo-Moyale Highway…where we had lunch. From Merille we went to Isiolo, the straight to Nairobi.

With permission from the community in Karare, I did some portraits of the villagers as they prepared for the big event. Check out the thread below…

There is a Rendille community in Marsabit at a place called Karare.We spent the morning in their Manyatta as we watched them prepare for a big initiation ceremony that will take place tomorrow.I did a small photoshoot & asked them to smile for the 2nd shot. The response was ? pic.twitter.com/KoBqcFqLua